The Legend of the Foundation of Freckenhorst

The history of the monastery and the collegiate church reaches back to the early times of Christianity in Westphalia. It is connected to important families in the Carolingan period and reflects a piece of the history of the medieval empire, as well as the age of Reformation, religious wars, the Age of enlightenment and the Napoleonic era when the foundation finally declined. The beautiful and impressing collegiate church still reminds us how important Freckenhorst once was.

1. The Legend of the Foundation 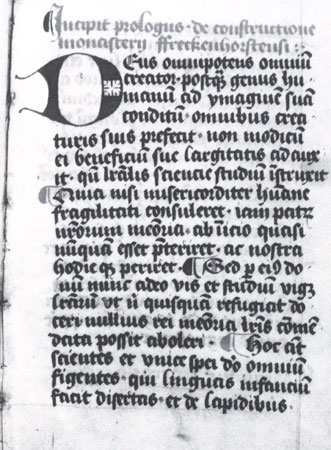 The only text that informs us about the foundig times is a legend written at the beginning of the 15th century and called De constructione monasterii Freckenhorstensis. There is also a version of this legend in Lowgerman: Hyr begynnet de fundacie, wo de kercke und das kloster des stichtes tho Freckenhorst erst ys wunderlyken van der genade Godes getymmert.

According to this legend, in the times of king Ludwig der Jüngere (* about 830, + January 28th 882; married to Liutgard, daughter of the Saxon earl Liudolf) there lived once man named Everword who belonged to the noblest people at that time. His wife Geva distinguished herself by extraordinary beauty and charity. The couple owned a considerable amount of inherited and important farms and estates. However, God denied them some children.

This noble had a swineherd called Freckyo who had the task to drive his master's pigs to an oak forest in order to fatten them there every autumn. It is said that the village's name, Freckenhorst, derives from this servant Freckyo. In the evening he returned with the pigs to his hut that was placed on a small hill and offered scanty protection against wild animals and thiefs. One night Freckyo noticed a frightening bright light between the trees in the dark forest. Terrified, he did not dare to visit the place until the next morning, but he could not find any traces. To his surprise, the light reappeared in the following nights.

Later, when the reeve and another official of the nobleman came to see the swineherd, Freckyo told them about the frightening appearance. The reeve reported the story to his master, who instantly had it examined by his faithful servants. These also saw and later confirmed the existence of the mysterious appearance. The light was even brighter then. They all agreed that the illumination could only come from relics of martyrs or other sanctuaries that had been buried there in former times. After Everword had listened to their account, he himself went with them to the hill in the forest in order to see the place of the appearance. For the night a tent was built up. When it was dark, even the nobleman saw the mysterious light. Suddenly, there was such a light that the eyes could not bear it. The light indicated the outline of a house and of a man beeing about to measure the outline with a string.

Beeing a pious man, Everword regarded the appearance as a hint of God. He knew that the place should be consecrated to the Lord's honour. After this exciting occurrence, the nobleman could not sleep and prayed during the whole night. At daybreak Everword finally fell asleep and dreamt that the apostle Peter interpreted the appearance for him. Peter explained that in the light he had seen him measuring the house. The saint told him to set up the building in honour of God. When Everword woke up abruptly, the voice had gone. However, in the place where there had been the bright light, all trees were cut down and burnt as far as the apostle had indicated.

Not knowing what to do, Everword went to bishop Liudbert in Mimigardeford, today's Münster. The bishop advised him to clear the part of the forest that was devastated by the appearance. When this was done, the foundations for a church were laid. While they were digging, workers found a stone showing plainly the print of a human foot. Everybody was convinced that only Peter could have left his footprint there. Allegedly, when the legend was written down, the stone was still kept in the sanctuary as a genuine proof of the apostle's former presence. Everword erected the chapel and the bishop consecrated it in hounour of Saint Peter.

Furthermore, nearby Everword erected all buildings that are necessary for a monastery: refectories for summer- and wintertime, a heatable room, cells, a farmstead, a kitchen, a storehouse and a dormitory. When everything was finished, he selected twelve virgins who were able to write and read and should serve God and St Boniface in this place of monastic seclusion.

Having no children of their own, the couple adopted Thiatilda or Thiatildis, the daughter of Geva's brother. The legend continues and says that one day, when Everword entered Thiatildis' room to give her an apple, the young girl - still not able to walk - came towards him and fell into a vessel standing on the fire and containig hot water for beer brewing. Everword was terrified, fetched the girl out of the tub and regarded her as dead. He threw himself to the floor and together with his wife he promised to devote Thiatildis to the service of God if only she came back to life. When they had finished their prayer, they found the girl unhurt and sleeping.

Soon the foundation became famous all over the country and many nobles sent their daughters to Freckenhorst. Everword himself decided to withdraw from worldly life. His wife, who was sad first, finally agreed and also promised to join the clergy. Bishop Liudbert himself gave her the veil in Freckenhorst where she spent the rest of her life „obediently and as an example of monastic life.“

Everword divided his goods in three parts. Two of them he gave to the new monastery in Freckenhorst, the last part was for the monastery in Fulda, which he joined himself. He chose this monastery because his great-grandparents had had close relations to St Boniface. Allegedly, the apostle of the Germans had baptized them and had presented his great-grandmother with his staff that would give a sign when the news of his death arrive. Indeed, when Boniface died as a martyr in Friesland (754), the staff is said to have been rooting, blossoming and producing beautiful apples.

Parts taken and translated from: